Available for FREE at all vendors! 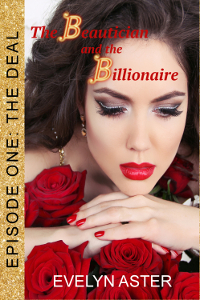 With the upcoming release of the final episode of The Beautician and the Billionaire, I’ve gone back and cleaned up some of the continuity errors that happen when writing off the cuff. The books in my Holiday Cafe series see a few drafts before they reach my editor, and then they see some more drafts after the first pass by Julie. But I didn’t have Episode 9 done before I started posting Episode 1. I didn’t even have Episode 2 done!

I’ve really enjoyed writing something so spontaneous. It’s been fun to add scenes based on reader reaction. That happened early on and then more recently with Episode 8. When I do another serial like this, I hope for more reader comments. That’s a big part of what makes writing a serial fun.

But I definitely had to make adjustments. For example, Raul is merely a driver in Episode 1. As the story progressed, I realized he needed to be more like a personal assistant because he had a much bigger role to play than originally planned. So I’ve gone in and changed all of Conor’s references to him to assistant rather than just driver.

Another error I had was when Conor first spoke to Becca. Originally he hadn’t spoken to her in three years, but as the story developed, I realized she would’ve been tormenting him all those years. So that’s changed.

I’m slowly getting the updated versions out to the public. I uploaded Episode 1 to Amazon yesterday, but they seem particularly slow and haven’t gotten the title updated. However, All Romance and Smashwords have the new versions with the new cover. If you’re new to my blog, the first Episode is free! Please check it out!

2 thoughts on “The Beautician and the Billionaire Episode 1 Re-Release!”