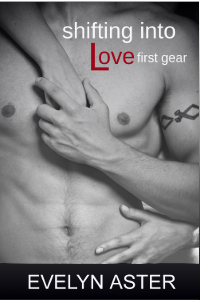 Good morning! I was busy yesterday formatting and uploading. Shifting Into Love First Gear is on sale at All Romance for $1! You can download it for Kindle, Nook, epub and pdf.

I’ll let you know when it’s up and other sites.

Please enter my giveaway for $10 Amazon Gift Cards! Just follow my blog for one entry and go back every day until Tuesday for a free entry!

And now I’ll continue the story….

Jones had been coasting along I-95 towards Main when the shift hit. The air around him switched to grayish waves. A hum wobbled in his ears. He gripped the handlebars of his Triumph, or Alea, as she liked to be called.

He held his breath and prepared to hit the brakes. Some days Alea seemed to have a death wish for him. His heart pounded as the waves widened. So long, Maine. He’d learned long ago never to count on ending at the destination he set out for.

The wave bottomed out on the lowest note to ever resonate through his body. The atmosphere blackened and spit him out into the midst of city traffic. Headlights glared to the left. A red light hung ahead, making him hit the brakes. A horn behind him made him hope the car was as fast on the brake as he was.

The motorcycle stopped part way into the crosswalk. No crash from behind. When he turned to look with a racing pulse, he saw there was only a half an inch between him and the car.

“You cut it close this time, Alea,” he said aloud in his helmet.

Glancing around he saw the Chrysler Building ahead. New York City.

And then the yearning hit—agony and hope all in one. Alea had a hole inside her soul as vast as the ocean. She was searching for something, but he had no idea what. He just knew that when she shared the longing with him, the physical pain was almost unbearable, making him sweat and shake.

When the light changed to green, he gritted his teeth, let up on the brake and accelerated. A new sensation penetrated his connection with Alea. He was too busy navigating the traffic while all his muscles hurt to figure out the new emotion. He was in the center lane, and when he’d cleared the intersection, the car behind him passed on the right with its horn blaring.

Alea accelerated on her own. Impatience. That was the new feeling. No not quite. Maybe anticipation. At least the pain was ebbing.

As he kept going, Alea purred again, soothing his muscles. Something caused him to turn his head to the right. A red neon light above a bar said Harrigan’s. A woman inside the bar holding a bottle of wine stared back at him.

His own yearning suddenly pushed aside Alea’s. Something about the woman inside the bar connected with him. Alea nudged him to pull over, but a bus had stopped to pick up passengers in the right lane. Even so, the motorcycle insisted. It took all his strength to keep the handlebars straight.

“We’ll have to go forward and turn around,” he said.

The motorcycle accelerated and sped past an orange light that turned red before they made it through. It did a U-turn in the middle of the street during a slight break in oncoming traffic. The light was still red, but Alea sped back into the intersection.

“Are you fucking crazy?” shouted Jones inside his helmet. They approached where the bar had been, but the sign above it said McClellan’s instead of Harrigan’s. The woman was gone.

Anger revved from the bike into him. Jones had no control as the bike sped forward to another red light. Traffic rushed across the intersection. He was about to T-bone a car when the waves of the shift hit.