I’m so excited about the release of the box set Intoxication tomorrow! It has Masked Hearts in it along with 6 other stories for only $0.99! I hope you read it! And now, on with The Beautician and the Billionaire: 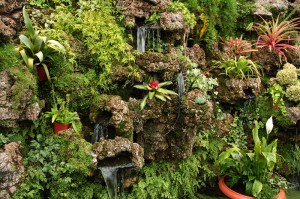 Conor reclined in the giant swing suspended from the ceiling of his conservatory. Two rows of pillows propped him up, but he could easily rearrange them so he could lie out flat like it was a bed. There was even room for Charisse to join him.

The thought of her soothed the pain he’d had for two days. He couldn’t believe he was missing lunch with her. Raul said she’d called a couple of times over the weekend and even left a text asking him to call her. Pain thrummed through him again at the thought of everything keeping them apart.

He had his eyes closed and focused on the heat of the morning sun shining through the walls of glass. A stream ran throughout the room and below the swing. The sound of it soothed him enough that he’d been able to fall asleep a couple of times that morning. Mostly, he hadn’t slept, which made the migraine go on endlessly.

An air-conditioned breeze swept over his bare chest. He opened his eyes in time to see Raul walk around a patch of purple and blue hollyhocks. Raul carried an opalescent vase with a broad opening that Conor had asked him to get from Tiffany’s.

“Why do you have it out of the box?” asked Conor. He didn’t wait for the answer before he closed his eyes and leaned his head back against the pillows again.

“You said you wanted to fill it with Gladiolas for Charisse. I thought you might want to do it today.”

“I can hardly see, much less trim and arrange flowers.”

“Would sir like me to do it then? The other driver is picking her up at six to bring her here.”

“What?” Conor bolted up and wished he hadn’t. All his blood seemed to pound through his head. “You know I hate seeing people when I’m like this.”

“Charisse asked if she could help. You said on Saturday you had a rough start with her. I thought you’d be pleased to have her here.”

Conor couldn’t think of anything he wanted more than to have Charisse with him. But he looked and acted like a beast right now. He hadn’t shaved in three days, he’d worn the same black basketball shorts since he got home Saturday, and he always yelled at people, even when he tried not to.

He took a deep breath and attempted to calm his voice, but it still sounded like a growl. “Having her see me with a migraine is not going to endear me to her.”

Raul frowned and held out the vase. He skipped over all arguments and went straight to the point. “I know Becca brought this on. You didn’t kill Elise. And you don’t need to live like a monk. Let Charisse help you.”

Conor hated it when Raul was right. He grabbed the vase and stared at the pearly luster. He’d been trying to help her. But he probably needed as much help as she did, just for different reasons. Pathetic and romantic at the same time.

“All right,” said Conor. “Find me my sheers. But if I stumble and break this trying to give it to her, I’m blaming you for making me look like a fool.”

“I hope I also get the praise when she catches you before you fall.”