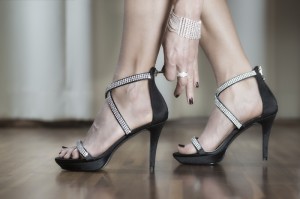 Charisse pressed through to the end of Saturday, wishing she’d agreed to see Conor that night. Marie either shut down or ranted about Daddy whenever they talked too long about Mother; Charisse didn’t want to listen to any of that. And she sure as heck wasn’t going to call Daddy and ask about Mother or Raul. But Conor had seemed more than willing to listen to her work through her problems. She needed to quit turning him away.

Walking home, the first chill breeze of fall blew by her. Autumn would be a welcome change from all the end of the summer turmoil. She should just call Conor and quit worrying about securing the loan. She couldn’t think of any reason why she wouldn’t get it.

She turned down her home street and enjoyed the sight of trees lining the sidewalk. It had to be a struggle to survive with smog and buildings blocking out the sun; the trees were always an inspiration to her.

She pulled her phone out of her back pocket and called Conor. It rang several times before clicking over to voicemail. She frowned and put the phone away without leaving a message. Maybe she’d have to wait to see him until Monday after all. Shoot! She’d been so distracted by Raul, she hadn’t set a time or place to have lunch with Conor on Monday.

When she entered her apartment, she saw a note from Marie saying she was going to be out with some girlfriends all night. Charisse crumpled the paper, walked to the kitchen and tossed it into the trash below the sink. She stared at the stainless steel appliances she’d be polishing tomorrow. They didn’t really need it. The hardwood floor looked decent too. She knew there was a pile of laundry waiting for her, but that wouldn’t take all day. Maybe she could see Conor tomorrow.

She pulled her phone out and called him again. Still no answer. It was probably against all dating rules according to Marie, but she left a text for him asking him to call her. He didn’t seem to like games, and Charisse didn’t like to play them.

But he never called.

Sunday, Charisse was half-way done with polishing the stainless steel appliances when Marie stumbled out into the kitchen. She had managed to put a night shirt on, but last night’s mascara was smeared across her eyes like a mask.

“Looks like it was a good night,” said Charisse.

“But a freaking terrible morning,” said Marie. She burped and sank into a chair at the round kitchen table. “I shouldn’t have had that last round of mojitos.”

Charisse wrinkled her nose. “I did the stainless steel. You get to do the floor.” She started to look away but noticed a diamond bracelet she’d never seen before on Marie’s wrist. She walked over to the table and peered at it closer.

Marie held up her hand and smiled at the diamonds. “You should quit ignoring Daddy’s calls. He comes bearing presents.”

“Conor’s willing to give it to you. I don’t know what your problem is.”

“It never should’ve been his in the first place.”

Marie gave a shrug, stood up and swayed to the refrigerator. She took out a carton of orange juice, opened it, seemed to consider drinking straight from the carton, but set it down on the counter.

As Marie got a glass, Charisse said, “So that’s it? Everything’s good between you and Daddy now? It just takes a trinket?” She wasn’t usually so mean, but the bracelet made her want to throw the bowl of fruit on the table.

“Oh quit being so high and mighty. No one’s perfect. At least he’s apologizing. And he is really sorry.”

“And what about Mom? Is he sorry about that?”

Marie had her back to Charisse as she poured her glass of juice. She set the carton down and slowly turned around. “You never blame Daddy for Mom leaving. That’s me. Why are you bringing her up now?”

Though Charisse hadn’t wanted to talk to her about it yesterday, after a night of her emotions festering, she wasn’t feeling as picky. “I saw Raul yesterday.”

“Raul?” asked Marie with a blank expression on her face.

“The driver we had when Mother was with us. He was the last one to see her, remember?”

Marie crossed the kitchen and sat at the table. “Did he tell you where she is?”

Charisse shook her head. “He seemed surprised we still didn’t know.” After a moment of silence, Charisse whispered, “I always thought she’d show up after I turned eighteen. I don’t know why.”

Marie reached out and took her hand, suddenly more sisterly and less drunkenly. “I always did too. Where did you see Raul?”

Marie widened her eyes. “I didn’t even notice him. He must think I’m such a brat.”

“Well, you were a little demanding when you were a girl,” said Charisse in her most diplomatic voice.

Marie snorted. “Just say I’m a bitch. I know.” She withdrew her hand and sipped her juice.

“Do you think Daddy would tell us where she is now? Would he tell me instead of giving me jewelry?”

Marie rolled her eyes. “Oh grow up. You’re everyone’s favorite. Get Conor to make Raul tell him where Mother is.”

Charisse shook her head. “He wouldn’t do that. And he’s not returning my calls now…” She allowed her voice to trail off. Maybe she’d turned down his affection one too many times.

Marie hefted herself up. “He’ll call. He has it bad for you. Where’s the freaking broom? I know you won’t let me nurse my hangover until the floor’s done.”

Charisse pointed to the pantry and pulled out her phone. Still no call from Conor.