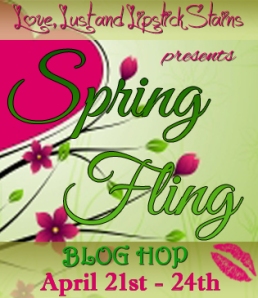 Welcome Blog Hoppers! This week is sponsored by the lovely ladies at Love Lust and Lipstick Stains. You can click on the picture above to see the list of other blogs on the hop or click on the frog icon to the side. There’s also a giveaway going on at http://www.rafflecopter.com/rafl/display/06395848/ . One of the ways you can enter is by following my blog!

For the hop, I’m trying something new that I hope you enjoy. It’s a sort of choose your own romance. Thanks to all the readers who voted on the first part! Tessa is letting go and finds someone unexpected at the bar. Please read part two of April Showers and let me know what she should do next. If you missed part one, it’s here: April Showers Part 1.  I’ll post the next part of the story tomorrow according to the vote. Keep coming back the rest of the week to see the story unfold as chosen by the readers.

Tessa dropped his hand and pushed a stray strand of blond hair behind her ear. It was one thing to step out for drinks after several months, and another to start flirting with her assistant. “Thanks for your help,” she said. “I think I’m okay now.”

“Sure,” he said and headed towards the double doors. He didn’t appear to feel slighted or embarrassed so maybe he’d just been being helpful and not flirting at all. Tessa brushed out imaginary wrinkles in her skirt and caught up to him.

She found herself admiring the way his suit fit his shoulders and masked the muscles beneath. He worked out during his lunches, and she’d seen his perfect abs in passing once. Geez. The memory made her blush. She’d still been married when that had happened. She shouldn’t recall it so clearly.

He pushed the door open for her just when thunder boomed as if the lightning had been straight above. The rest of the group jumped and looked up as they stood at the corner waiting for the light to change. No one was paying attention to Tessa and Mark as they walked slowly towards the group. Half-way there, the rain showered down on them with no warning sprinkles.

Mark shrugged off his coat and draped it around Tessa without even asking. She tried to protest. “Oh no, I couldn’t possibly. You’re getting soaked now.” And damn he looked good with the shirt already clinging to his body. She averted her eyes.

“I figure I can’t win in this situation.” His hand slid from her shoulder down to the small of her back before he let her go.

“Oh, and how’s that?” Their knuckles bumped and she had to resist the growing temptation to hold his hand. They were both professionals just heading out for a friendly drink with the rest of the crew after a long month.

Tessa gave him a sideways glance when he said beautiful. “Sounds like you need a new boss. I think your deftness at moving through such tricky situations is under appreciated.”

They caught up to the rest of the group right as the light changed. Tessa tried to comb through her wet hair but knew it did no good.

“I could never leave her,” he said.

“She could never figure out my intricate filing system and the company might sue me for malicious intent.”

Tessa pushed him away as they crossed. “You always think you’re so superior. I don’t know why I put up with you.”

“Admit it. You’d be lost without me.”

There was snark in his voice, but a pang of guilt hit her all the same. When they reached the corner, she took his elbow and made him stop with the rain still drenching them. “I don’t think I’ve ever really thanked you for keeping me on track this year. You’re the only one who really knew everything that happened, and it meant more than you know to be able to confide in you.”

He reached out and touched her cheek with his fingertips. “You can always count on me.”

Okay, she was not imagining his sincerity or the slight yearning in his voice as he spoke—both things she’d desired from her ex-husband for so long. She turned towards the bar and said, “We’d better get inside before they’ve decided we’ve washed away. She walked to the door, opened it and enjoyed the blast of bar noise as she entered.

Screens showed sports, a juke box blared music from the nineties and everyone tried to talk over it. Mark stepped behind her and said, “Oh shit.” He took her by the shoulders and twisted her to the right. “There’s everyone in those booths. Looks like Beth is saving you a seat.”

“Nothing.” His voice sounded tight.

Curiosity mixed with jealousy made her turn to try and figure out which woman would be Mark’s ex. She’d never seen pictures of girlfriends on his desk now that she thought of it. Mark kept pushing her towards the table as if he didn’t want her to figure out who it might be. She twisted her head until it wouldn’t go any further and stopped—her feet planted to the ground as if she were part of the building.

Rick sat at a high table, laughing at something the woman he was with had just said.

What the fuck was he doing here?

It wasn’t like they’d drawn out territorial lines on a map, but his office was several blocks down. He didn’t even like Harrigans, or so he’d claimed whenever Tessa had asked him to meet her there after work.

“Just keep walking, Tessa,” pleaded Mark next to her. “He didn’t see you walk in.”

Tessa stood immobile. She wanted to go yell at him to get the hell out, but then she’d look like a real bitch. His head turned and their eyes met. They were light blue, like her own, but he wore the lines of age better. The smile in them changed to sadness. Tessa’s stomach twisted up.

Mark whispered, “Come sit with us. You’ve worked hard for so long. Don’t let him ruin this afternoon too.”

Unable to think clearly, she allowed Mark to lead her to the table. She sat next to Beth, and everyone scooted over to make room for Mark to sit next to her. He took her hand again under the table, and she squeezed it hard. She made herself smile and said, “So what are we drinking today? Beers for everyone?”

Jeff said, “If you’re buying, lets make it a round of their best scotch.”

“I’ll compromise and buy everyone a cosmo, but you have to drink it with your pinky up.” Everyone laughed, and Tessa was unsure how she was even talking with Rick on the other side of the room. Except he wasn’t. He was standing at their table. Mark squeezed her hand.

“Hey Tessa.” His voice was deep with a resonance that always made her ache when they were in bed together.

“Hey,” said Tessa without looking up.

“We’re here celebrating closing an account, so why don’t you leave and let her enjoy herself for a change,” said Mark.

“You can call off your guard dog Tessa. I just came here to talk to you. I’ve been waiting for an hour hoping you’d come here. Could you sit at a table with me?”

Tessa stared straight at the table. He could’ve just called if he had something to say. He didn’t need to make a scene in front of her team. But his voice at the end had sounded almost desperate. What could possibly be the reason? She so didn’t want to deal with this right now.

What should Tessa do: go talk to her ex-husband or stay with her coworkers?